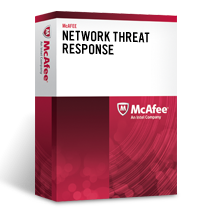 McAfee Network Threat Response is a software package that captures, deconstructs, and analyzes malware that is resident inside your network today. Network Threat Response is a powerful cyber tool for security analysts. It automatically identifies malware targeting internal network vulnerabilities, and instantly captures and analyzes it to aid in rapid remediation and ongoing network defense.

Reveals what attackers don't want us to see
Network Threat Response combs through PDFs, Microsoft Office files, and all other network activities looking for attempts to hide or obscure malicious content. Network Threat Response is not limited to finding and alerting to the presence of obfuscation; it decodes the traffic, providing analysts with visibility into the attack that is not possible with any tools currently available.

Assembles puzzle pieces together
With the unique ability to uncover slow moving, persistent attacks, Network Threat Response identifies and accumulates portions of attacks that trickle in over time. No other malware product in the marketplace can piece together threat puzzles that sneak into networks at a snail’s pace.

Cuts analysis time down to minutes
Network Threat Response accelerates the complex analysis of captured data via its PCAP import capabilities. As the data is replayed through the advanced analysis engines, hidden traffic is decoded and key indicators are highlighted. As a result, a security or IT analyst has anchor points from which to start a pre-qualified investigation — shaving days off of analysis time.

Maximizes security staff effectiveness
A single Network Threat Response instance gives any security team the power of 20 analysts and reverse engineers without requiring a single hire. Unlike other security devices, which can generate thousands of events a day, analysts can review every event generated by Network Threat Response in minutes versus the hours, days, or weeks needed today.

Get deep visibility into the threat context inside your network. McAfee Network Threat Response can examine a series of packets to characterize an attack, discover malware payloads embedded inside PDF files, analyze payloads, and even recreate the series of packets that attempted to conceal the threat.

Find new network activity and new behaviors unique to your network, accelerating malware analysis and threat response. McAfee Network Threat Response focuses on identifying, collecting, reverse engineering, and labeling malware and bots. It provides real-time capture and analysis of malware and threats inside your network, and determines what occurs after the initial labeling or characterization of an attack.

How To Buy McAfee

For pricing or technical questions, please contact our team!