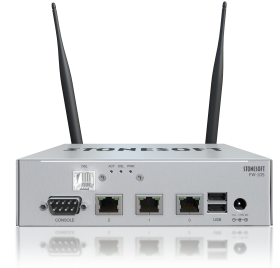 The Stonesoft Express FW-105 FW/VPN appliance is a firewall solution designed for small branch offices or for protecting communications from small machine-only environments. With three ethernet interfaces, and an optional ADSL interface and WLAN access point support, the Stonesoft Express FW-105 offers an integrated solution for secure connectivity with a small footprint and power consumption.

The Stonesoft FW-105 provides support for plug-and-play installation that eases deployment to a very large number of sites. It also provides DHCP for remote offices.